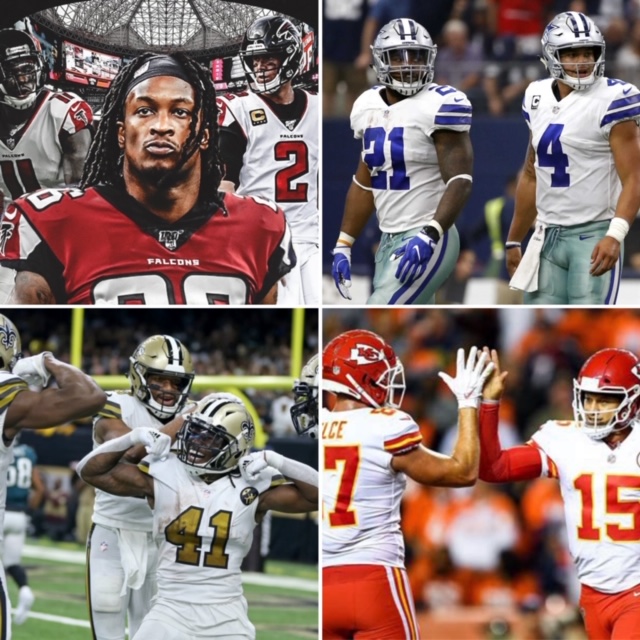 I recently posted the following question on social media.

The votes are still coming in, which prompted me to analyze the key fantasy components for each of these four teams. Let’s break it down in ABC order.

The Falcons sported the fifth-best offense in 2019 by creating an average of 379.7 total yards per game. This amounted to gobs of fantasy points being scored by QB Matt Ryan and his dynamic offense.

Ryan’s team this year will include the multi-talented RB, Todd Gurley. If Gurley stays healthy, he should easily be a top-10 fantasy scorer at his position. I recently and boldly predicted that he tallies at least 1,800 total yards and has 15 touchdowns.

Aside from Gurley is stud wideout, Julio Jones. Jones has averaged 1,564.5 yards per season since 2014. Look for him to keep the fantasy points pouring in this fall.

Falcons No. 2 WR Calvin Ridley is no fantasy slouch either. He’s s touchdown vulture, having scored 17 total times in his first two years.

At TE, the Falcons added Hayden Hurst. Since Ryan is a QB that heavily involves his TEs on offense, look for Hurst to be very fantasy relevant. Last year, former Falcons’ TE, Austin Hooper was the fifth-most targeted at his position.

Overall, the Falcons incorporate a very pass-heavy offense that is necessary to keep the team functioning among its very competitive division.

Let’s break down the ‘Boys who produced the most total yards in the NFL in 2019.

QB Dak Prescott was No. 2 at his position last year, racking up 4,902 passing yards and 277 more on the ground.

Look for his passing yards to continue to thrive and be primarily sub-divided between Amari Cooper, Michael Gallup, and rookie CeeDee Lamb.

Cooper will likely garner half of the targets between the three WRs while Gallup and Lamb remain fantasy worthy at WR2 and flex.

At TE, keep an eye on Blake Jarwin who could work his way into a top-10 option. The Cowboys have always kept their TEs plenty active as targets.

Lastly, is RB Ezekiel Elliott. He is the complete package when it comes to running and catching the ball. For this, Zeke has averaged 125.4 total yards per game and 12 touchdowns per season since his 2016 rookie year.

Worth owning also as a bench stash is Tony Pollard, should he need to fill in for Elliott.

On a side note, the Cowboys reportedly plan to allow fans at their games in 2020. If this happens, it will help keep the team pumped and the fantasy spoils rolling in.

The Chiefs offense featuring QB Patrick Mahomes is exciting to watch and it never fails to disappoint its fantasy owners every single week.

Mahomes is easily predicted to be the No. 1 fantasy-scoring QB in 2020. He will get this done by primarily targeting super-speedy WR Tyreek Hill and his beastly TE, Travis Kelce.

Then there is the somewhat over-hyped rookie RB, Clyde Edwards-Helaire. He should produce RB1 fantasy points in most situations. However, he is a rookie, so expectations should be tempered. I would hope that he posts 1,200-1,300 combined yards and scores upwards of 10 times.

To summarize, the Chiefs boast a very talented offense heading into 2020 and one that could produce the No. 1 fantasy QB and TE duo.

The Saints averaged a stout 28.6 points per game in 2019, which resulted in all kinds of fantasy rewards.

Drew Brees at QB will continue to do your fantasy team no wrong in 2020. He has maintained a whopping average of 301 passing yards per game since 2006. This handily makes him a QB1 on a regular basis.

Primarily catching the lion’s of Brees’ balls is Michael Thomas. Thomas is an absolute animal on the field and last recorded a league-high 107.8 yards per game. As such, Thomas won’t be around much past 1.06 in most drafts this year.

To accompany Thomas on the Field, WR Emmanuel Sanders is new to the Saints. His current ADP is 9.01, so if you can pick him up late, he will be a great contributor to your fantasy team, provided he plays healthy.

At TE, veteran Jared Cook should still keep doing his thing. Though, the 705 yards and nine touchdowns he produced in 2019 might be a little bit of a stretch.

In the backfield the Saints have that one-two punch with Alvin Kamara and Latavius Murray.

Look for Kamara to be even more involved than last year while garnering the bulk share of RB duties. Meanwhile, Murray makes a fabulous handcuff and goal-line back.

The trio of Brees, Thomas and Kamara make for my No. 1, if I had to rank all of the NFL’s QB/WR/RB sets.

As far as the other NFL fantasy offenses, I would have to say the Buccaneers, Ravens, Packers, 49ers, Seahawks, and Steelers would round out my top-10 if I was to further elaborate here.

One thought on “Four Best Fantasy Football Offenses in 2020”

Back in bit. Going to spend about an hour with my @getthemirror

Need to get back into my workout more groove. Happy Tuesday all!