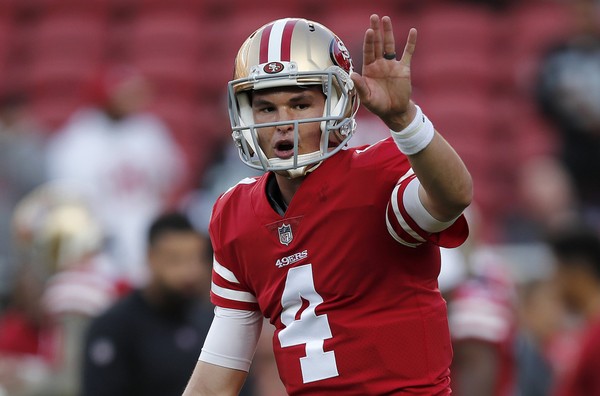 Need quarterback help in Week 9 due to injuries or bye weeks, check out these three waiver wire options to target.

For those who lost Jimmy Garoppolo or have a quarterback on a bye in Week 9, get Mullens off the waivers. He did a commendable job when he replaced Garoppolo, throwing for 238 yards and two touchdowns against the Seahawks in just one quarter of playing time.

He’ll face Green Bay in Thursday Night Football when we can expect Mullens will have to throw the ball plenty to keep the 49ers competitive.

Luton is expected to make his start while Gardner Minshew heals from a thumb injury. For now, this rookie QB is a dart throw. However Luton should come off of the waivers as at least a bench stash, especially for those need roster depth.

If you are planning on starting Luton in fantasy in Week 9, take note that he has a very favorable matchup against the Texans. Houston has given away the farm in passing yards and eight passing touchdowns over its last two games.

Jones may be finally figuring out this football thing. Those who find themselves in a bind might need to lean on Jones in Week 9. Oddly enough, he last performed pretty well against a tough Buccaneers defense in Monday Night Football.

While he did throw two picks, Jones managed to throw for two touchdowns and 256 yards. This was his highest amount of passing yards since his 279 accomplished in Week 1.