Is JuJu Smith-Schuster the Biggest Fantasy Football Bust in 2020? 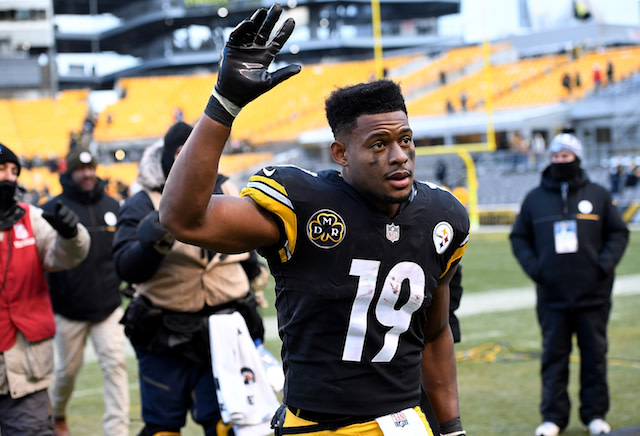 Let’s face it. Pittsburgh Steelers wide receiver, JuJu Smith-Schuster has been one of the biggest fantasy football busts in 2020.

I really dislike putting this out here, because, I personally think Smith-Schuster is a great guy.

But the fantasy reality is, Smith-Shuster is barely touching the ball these days after giving his owners one sound performance in Week 1. Here’s the cold, hard facts.

As we can see, these numbers are terrible. Smith-Schuster has averaged a lowly 38.8 yards per week over five games.

1. Ben Roethlisberger spreading the ball around to other key playmakers:

The elephant in the room is obviously, Chase Claypool. He has emerged as a huge asset to Pittsburgh. In Claypool’s last two games, he has turned 16 touches into a magical 197 total yards and five combined scores.

Coincidentally, these last two weeks have been nightmare games for JuJu.

2. The Steelers don’t always need to throw the ball:

Let’s face it. The Steelers have been playing exceptionally well. This means they can afford to run the ball versus slinging it when Pittsburgh is controlling the clock.

What do fantasy owners do with Smith-Schuster moving forward?

Currently, Smith-Schuster is a big fantasy bust and he must be benched.

However, we all know the game we bench him, Smith-Schuster will perform like a rock star.

Plus, we have to believe that defenses will eventually better focus their efforts in tightening coverage on Big Ben’s other weapons. With that said, Smith-Schuster is going to have his up and down games that frustrate the heck out of fantasy owners.

Personally, I would look to trade him away after he surprises with one or two big fantasy outings. Smith-Schuster is very talented, but his weekly potential varies way too much on game script.