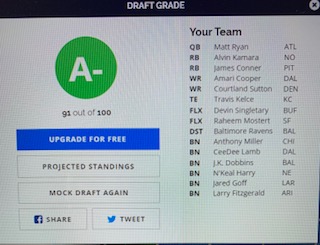 Here is a mock draft I completed picking from 1.06 of a 12 team league, using Fantasy Pros simulator. I set the draft up to a full point PPR scoring and included these positions: QB, RB, RB, WR, WR, TE, WR/RB/TE, WR/RB/TE, DEF, and six bench spots.

I’m pretty happy of my A- grade and fully intended to wait late to draft my quarterback. Here are my picks in order:

1.06: Alvin Kamara, RB Saints — I had no issue taking a solid RB1 here especially from my favorite NFL team.

2.07: Travis Kelce, TE Chiefs — I typically do not go for the big-name tight ends early, and instead draft a WR here. This was out of my comfort zone, but I think it would paid off.

3.06: Amari Cooper, WR Cowboys — Cooper is a bit risky of a pick with his other Dallas receivers commanding targets. But as the 11th receiver off the board, Cooper makes a decent enough WR1 for my roster.

4.07: Courtland Sutton, WR Broncos — Sutton is quickly turning into one of my most coveted players, and I absolutely love him as my WR2. Getting him mid-fourth round is a total bargain in my opinion.

5.06: James Conner, RB Steelers — This is probably why I got the ‘minus’ in my draft grade. If healthy, Conner is a dependable RB2 behind Kamara.

6.07: Devin Singletary, RB Bills — I almost opted to pick Singletary instead of Conner, but lo and behold, Singletary was there for the picking for my next turn. If Conner stinks, Singletary fills his spot.

7.06: Raheem Mostert, RB 49ers — If Mostert keeps his lead role, then he will far surpass his seventh-round value in 2020. Fingers crossed.

8.07: Anthony Miller, WR Bears — Drafting any Bears is out of my norm. But, I can hope that Nick Foles will help launch Miller into WR2 territory.

9.06: Ceedee Lamb, WR Cowboys — Love this pick and he works as a handcuff for my Amari Cooper.

10.07: J.K. Dobbins, RB Ravens — Another rookie. I know. But he will be the guy the Ravens lean on if Mark Ingram misses time. He makes for good trade bait if anything.

11.06: Matt Ryan, QB Falcons — I could have waited even later for my quarterback, but I wasn’t big on the options (including Baker Mayfield and Ben Roethlisberger) beyond Ryan if I passed. Ryan typically throws a ton and ranked 11th in fantasy points last year.

12.07: N’Keal Harry, WR Patriots — I see little risk and high reward potential here. Behind Julian Edelman, Jarrett Stidham has to throw to someone.

13.06: Baltimore Ravens Defense — I could have gone one more round before I picked a defense.. but I don’t think last year’s fourth-ranked fantasy defense is horrible to land in Round 13.

15:06: Larry Fitzgerald, WR Cardinals — One of my all-time favorites! I think Fitz does decently as a bye week fill-in as part of the Kyler Murray/DeAndre Hopkins trio this year.

In my next mock drafts, I will practice from either the 1-2, or 11-12 position. Happy Mock Drafting All!